One of my favorite books of all time is Zero to One by Peter Thiel. In his book, Peter Thiel says if you can identify a delusional popular belief, you can find what lies hidden behind it: the contrarian truth. The delusional popular belief I identified in college is that college is all about partying and losing yourself in the experience. I believe the contrarian truth is, it’s more important to find yourself than to lose yourself in the college experience, because that feeling of being lost is one from which most people never return.

For the record, I have nothing against partying. I am not saying that people who go to parties will not be successful, and I agree there are some social benefits. This is merely one college student’s perspective and my take on the experience. I went to parties in college, but I hated it. I always felt totally out of place, like I had nothing in common with anyone there. For whatever reason, it just wasn’t for me. If I had to bet, I think there were more people than just me at those parties who felt that way. A lot of people join in because that’s the culture of the American college experience. As a student, I felt that there was no other option. 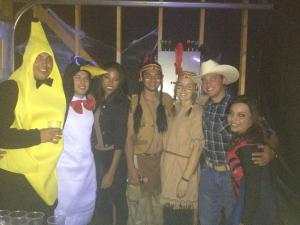 My problem is not partying itself; of course there is a time and place for that. My problem is with the overall lifestyle and perception. The lifestyle of partying in college is unrealistic compared to how life is after college. Many people party 3-4 nights a week in college for four years straight, then they have to come to the realization that it’s hard to function that way in the real world.

The experience I had is nothing compared to what’s happening at larger schools like CSU-Fort Collins and CU-Boulder. I’ve talked with people who went to those schools, and it took over their lives. They were going to parties every single night, staying out until 4:00am and sleeping in the next day until 2:00pm. With that kind of routine, school is no longer part of the equation, and it starts to have a huge effect on a person’s mental and physical health. The people going through this experience eventually had to drop out and leave those schools because it became such a big issue.

I understand that it’s a huge uphill battle to try and change the current culture of college. After all, as humans we tend to not react to problems until it becomes a crisis. Some would argue though, it’s already a crisis. It’s a crisis because not only is it an unhealthy, unrealistic lifestyle, but it also impedes students from engaging in other activities that would be of greater benefit to their future selves. College is the platform from which we’re building the leaders of the future. The progress of our world rests on whether or not these students have properly prepared themselves to take on that challenge. I’m on a mission to show students that there is another path, and inspire them to have the courage to oppose the crowd and to take the path less traveled.