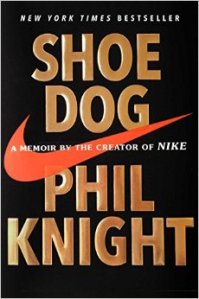 Nike Shox. Anyone who truly knows me well, knows Nike Shox are my shoes of choice. I’ve been wearing those shoes for years, yet I never knew any of the story behind the swoosh. About a month ago, I read Shoe Dog by Phil Knight, the creator of Nike, and it instantly became one of my favorite books.

Immediately, in the first few pages of the book, he caught my attention: “But deep down I was searching for something else, something more. I had an aching sense that our time is short, shorter than we ever know, short as a morning run, and I wanted mine to be meaningful. And purposeful. And creative. And important. Above all…different. I wanted to leave a mark on the world. I wanted to win.”

“I wanted to leave a mark on the world.” Those words struck me. The reason they struck me is Phil Knight wrote those words after reflecting on how he felt at twenty-four years old, coincidentally the same age I’ll be this June. I can’t help but notice I share the same mindset. Four years ago, during my freshman year of college in the President’s Leadership Program, we had to write a journal entry every week. I’m looking through my journal as I write this, and a section of one of my entries reads:

“I can remember thinking all the way back to fifth grade and it just hit me one day that I was destined to do something great. At the time I thought that something was basketball and now I’m not sure. All I know is I want to change the world in one way or another. One day during my junior year of high school, my weightlifting coach randomly walked up to me in class, shook my hand, and said “Shake the hand that shook the world,” and then he walked away. It was if time froze and in a weird way I was being told what I was meant to do. One day I will shake the world.”

In Shoe Dog, Phil Knight takes us on the roller coaster that is his life, and walks us through the creation of Nike, year by year. It’s chaos, to say the least. Every year he reaches a point where it seems like losing his company is inevitable. Adversity was the environment in which his empire was built. Through those struggles, he offers his advice, maybe the only advice any of us will ever need: “Let everyone else call your idea crazy…just keep going. Don’t stop. Don’t even think about stopping until you get there.”

In the last chapter of the book, Knight talks about watching the movie The Bucket List for the first time. For those of you who haven’t seen it, it’s a movie about mortality. Two men, played by Jack Nicholson and Morgan Freeman, both terminally ill with cancer, decide to spend their remaining days doing everything they’ve always wanted to do before dying. Knight uses this as the theme to shape the end of the book. He talks about traveling the world when he was a young man, and the coincidences of those travels that unfolded later in life. He talks about how he was affected by the money he accumulated. He covers Nike’s sweatshop controversy and how that led him to make Nike’s factories the gold standard in the industry. He talks about the camaraderie with Nike’s athletes, and quotes The Bucket List when he says “You measure yourself by the people who measure themselves by you.” Then again, he talks about death.

Even after all these years, after everything he’s accomplished, he’s still struggling to figure out what his legacy will be. That’s what keeps him up at night. I think if we were all honest with ourselves, that’s the question that keeps all of us up at night. Will anyone remember my name? Will the world remember me when I’m gone? All we can do is strive to leave a legacy. That truly is the only thing that survives long after we’re gone.